Occasionally, I would notice the extruder struggling and the temperature was way down. That puzzled me, as I usually pre-heat the bed and nozzle and replicatorg waits until the bed and extruder are at the proper temperature before starting. I traced it down to a connection at the heating resistor that was made with lead-solder and not high-temperature silver bearing solder. I was able to repair that, but I also noticed a number of screws loose (on the bot…) and saw that one of the resistors on the hot-end looked like it was coming apart. Pictures of the cartridge heater are below.

While I was at it, I could install the lighted ring accessory.

I printed this awhile ago and ordered some ebay leds. The leds came awhile ago but installation of the ring requires removing the hot end, so I waited until now to do it. I was concerned that the red plastic would impart a pink hue to things, so I used some spray glue and pressed some aluminum foil onto the surface. I then pressed LEDs into the ring with the Cathodes to the inside, taking special care not to make any aluminum foil short circuits. The cathodes were wired together, and the anodes were soldered to resistors. The resistors were soldered together in a ring to form the +12 bus. A pair of wires was then connected to the lighting wiring in the bot so it could be switched on and off with the interior lighting. You can see the new cartridge heater in these pictures. 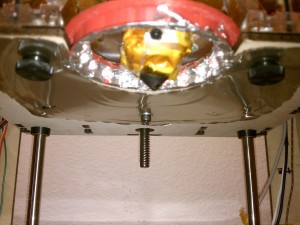 I also had this crazy idea that I would attach some aluminum sheet to the bottom of the z-axis to help reflect some light back down to the build surface. I don’t think it was very effective, but doesn’t seem to hurt anything.

This entry was posted in Acquire, Build, MakerBot, Parts. Bookmark the permalink.